Please join KLRU’s Overheard with Evan Smith for an interview with Isabella Rossellini on November 13 at 12:15 p.m. in KLRU’s Studio 6A (map). The event is free but an RSVP is required. 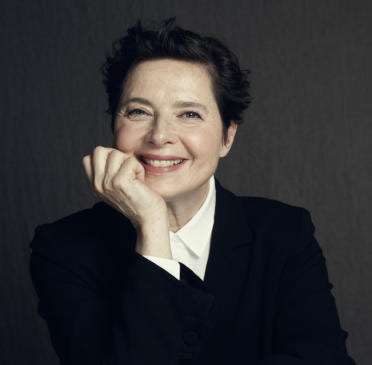 Isabella Rossellini is a renowned actress and model who grew up in Paris and Rome. At 19 she moved to New York City to work as a translator and journalist for RAI-Italian Television. She began her modeling career at age 28, and in 1982 began a 14-year run as the exclusive spokesperson for the cosmetic brand Lancôme.

Rossellini, who is the daughter of film legends Ingrid Bergman and Roberto Rossellini, made her cinematic debut in 1979. She has appeared in films such as Blue Velvet and Death Becomes Her and has worked with iconic directors like Robert Zemeckis, David O. Russell, David Lynch and Taylor Hackford. At age 66, Rossellini earned her master’s degree in animal behavior and conservation. She is on tour with her theatrical show, Link Link Circus, which deals with animal behavior and cognition.

Entry procedures:
• KLRU members receive early studio access. This benefit is available only to current members with valid RSVP for up to 5 total guests in each party.
Not a member? Donate here.
• General admission begins 30 minutes after KLRU member entry. Priority access for members also ends at this time (no jumping the line).
• All attendees are still required to RSVP as usual. If the deadline has passed, walk-up admission may be offered on a space-available basis.
• Lobby doors will remain closed until published entry times. Lines will form outside on the plaza, rain or shine; please prepare accordingly. KLRU personnel will be available to assist guests with accessibility needs.
• ADA access is shown on KLRU’s map.

We hope you’ll be there as Overheard with Evan Smith continues its tenth season of interviews featuring engaging conversations with fascinating people. The show airs on PBS stations nationally and presents a wide range of thoughtmakers and tastemakers from the fields of politics, journalism, business, arts, sports and more. Please join us and be part of the studio audience at this taping with Isabella Rossellini. And don’t forget you can watch past episodes anytime at klru.org/overheard.

The information found on this website is believed by the owner to be correct when posted, but it hasn't always been verified. You must do your own research before making any decisions based upon what you see here. The Owner might, or might not, make a small commission if you purchase anything from links found on this website.